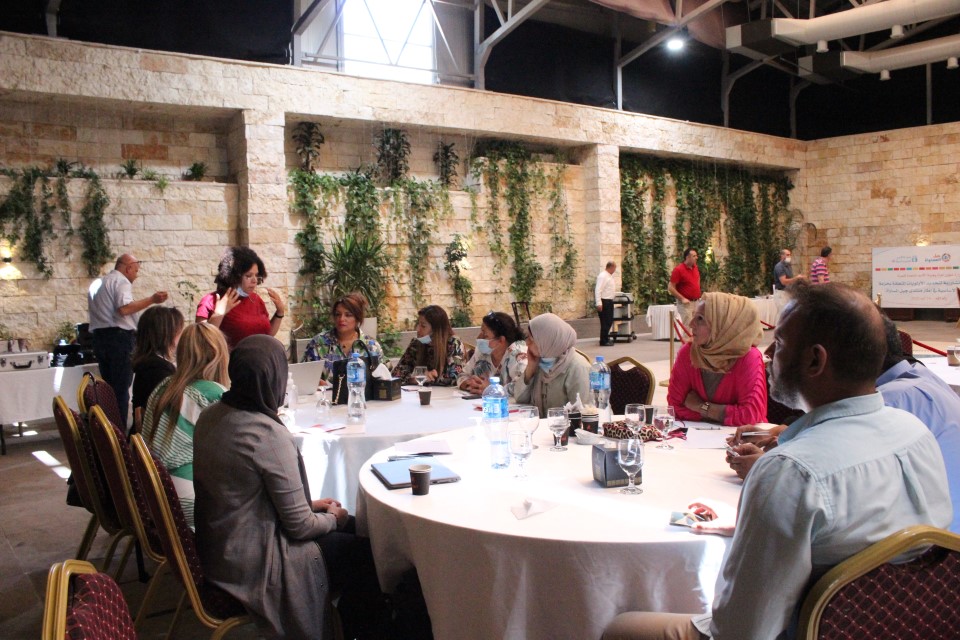 Representatives of government agencies, civil society organizations, the judiciary, police, universities, and UN agencies, among others, take part in a consultation workshop that was convened in Ramallah by the Ministry of Women’s Affairs and UN Women on 8 September 2021 /UN Women photo

RAMALLAH - More stepped up support and resources are needed to boost efforts aiming to end gender-based violence against women and girls in Palestine, according to key stakeholders from the Palestinian government and civil society. The key stakeholders recommended allocating more human and material resources to fight GBV and help survivors, including the provision of well trained and properly equipped teams capable of dealing with women and girls in need of such services in various areas of Palestine.

The recommendation came at the conclusion of a consultation workshop that was convened in Ramallah by the Ministry of Women’s Affairs and UN Women on 8 September 2021 with the aim of identifying priorities related to eliminating violence against women and girls in Palestine.

The consultation focused on localizing the global effort to achieve gender equality in accordance with the call by Generation Equality Forum (GEF), launched in March 2021 in Mexico and culminated in Paris in July 2021. It followed the State of Palestine’s joining GEF’s Action Coalition on Gender-Based Violence and its adoption of the Essential Services Package as part of the national action plan to implement commitments towards enhancing services to women and girl survivors and victims of violence.

Participants in the consultation workshop, who included representatives of the Prime Ministry, various government ministries and departments, the judiciary, civil society organizations, the Prosecutor General’s Office, police, universities, unions, UN agencies, including the United Nations Population Fund (UNFPA), UNODC, and the United Nations Relief and Works Agency for Palestinian Refugees in the Near East (UNRWA), recommended a set of top priorities for inclusion in the Action Coalition’s action plan to address GBV.

Participants agreed violence against women should be considered a top national priority in view of the high number of reported cases. According to the 2019 national violence survey conducted by the Palestinian Central Bureau of Statistics, 29 per cent of women, or nearly one in three, has experienced psychological, physical, sexual, social or economic violence by their husbands at least once during the preceding 12 months. Also of concern, 61 per cent of victims reported that they have never told anyone, such as a friend, a family member or a neighbour, about the abuse. In line with this, the so-called "honour killing" is a prevailing phenomenon in the Palestinian society.

The participants in the workshop emphasized the importance of creating protection lines for women, as well as communicating with the media in various ways to reach a unified discourse regarding women’s issues, highlighting the need for a strong national referral system and making available health and counselling services to women and girls, with a focus on those from most marginalized areas.

In addition, they underlined the need to provide economic support for women victims and survivors of violence, and called for building a national database for all actors working on the main areas of the essential services package, including protection, health and justice and policing services.

Minister of Women’s Affairs Dr. Amal Hamad affirmed the government’s keenness to fight violence against women and girls and ensure that their rights are safeguarded.

“We all are keen to create a violence-free environment and that our women enjoy the freedoms that are guaranteed by Palestinian legislation and documents, including the Independence Document, active Palestinian laws and relevant international treaties and conventions as well as the Sustainable Development Goals indicators,” Dr. Hamad said.

UN Women Special Representative in Palestine Ms. Maryse Guimond underlined the importance of addressing the rights and needs of women victims and survivors of violence, which requires having accessible multi-sectoral services that are developed within a complementary approach that brings together all relevant stakeholders to end violence against women and girls in Palestine.

“To bridge the gap in responding to gender-based violence and addressing the needs of violence survivors, quality multi-sectoral services should be in place and involve the health, justice and social sectors,” Ms. Guimond said.