In Celebration of the International Day of the Girl Child 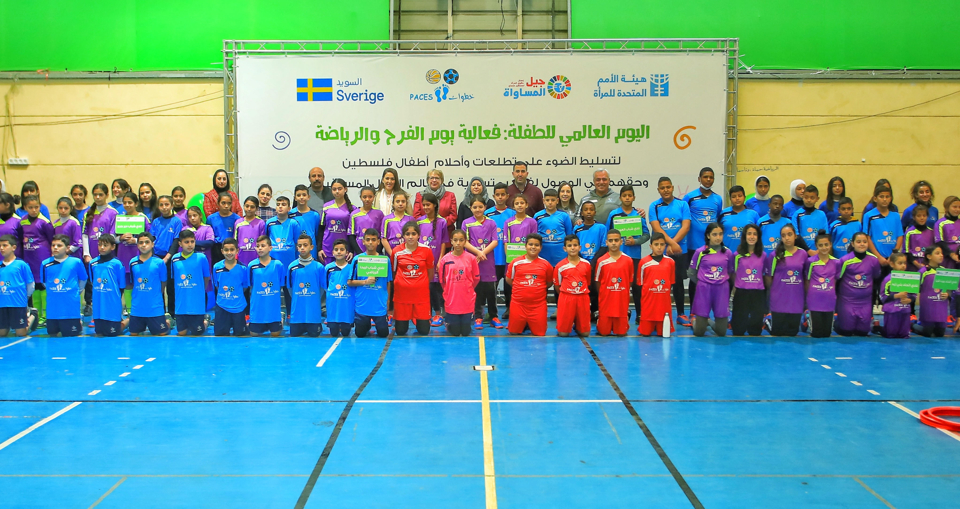 PACES and UN Women Palestine held a “Fun and Sports Day” event to celebrate the International Day of the Girl Child, which was held in the Majid Asaad Hall in Al-Bireh - Palestine.

The event, which brought together more than 100 girls and boys from PACES, aimed to shed light on their aspirations and dreams, their right to access equal opportunities in the future world of work, the challenges they might face, and the supportive environment they would like to see in the future. The programme was also designed to promote the concept of life skills among children during purposeful recreational and educational activities.

The event was organized within the framework of the regional programme “Promoting Productive Employment and Decent Work for Women in Palestine, Jordan and Egypt” funded by the Swedish International Development Cooperation Agency (SIDA), UN Women’s campaign “Generation Equality Forum: Realizing Women’s Rights for an Equal Future” and PACES' programme which promotes equal opportunities for all children in sports.

In the opening speech, Ms. Maryse Guimond, UN Women Special Representative said: “UN Women is committed to support the Palestinian women, men, girls and boys to achieve their greatest potential in the future world of work in all occupations”. She added that “They should have to have equal opportunities to participate in sports and realize their potential, including making their own life choice. Ms Guimond also stressed that the sports ecosystem and its various stakeholders have a strong role to play, especially with recent momentum escalating across the sport sector in favour of gender equality to challenge gender stereotypes and social norms.

From his side, Mr. Mohammad Sabbah, PACES Regional Sports Development Director said “We are pleased to be part of this celebration, which highlights one of the main objectives of our institution, which is to provide equal opportunities for both genders in sports. We are aware of the extent of the impact of sports on children, both socially and developmentally.” He added, "PACES has been providing healthy sports programs for girls and boys in refugee camps and the most marginalized areas in Palestine, Jordan and Lebanon every year since the launch of the programme in 2006. One of the most important achievements of the PACES has been to achieve equality in relation to the number of boys and girls enrolled in the program and to provide equal opportunities for them, reaching a female participation rate of 50 per cent.

During the activity, girls, and boys from all over the West Bank formed mixed teams and played sports related games. The children also participated in various recreational activities including face painting, dancing, and photography.

About Generation Equality: Realizing women’s rights for an equal future

On the 27th anniversary of the Beijing Declaration and Platform for Action - the most visionary agenda for the human rights of women and girls, everywhere, UN Women’s “Generation Equality: Realizing women’s rights for an equal future” campaign demands equal pay, equal sharing of unpaid care and domestic work, an end to sexual harassment and violence against women and girls, health care services that respond to their needs, and their equal participation in political life and in decision-making in all areas of life.

Thirty-two years ago, world leaders made a historic commitment to the world’s children by adopting the United Nations Convention on the Rights of the Child (CRC) on 20 November 1989. This international agreement, signed by the Palestinian Authority in 2017, is now the most widely ratified human rights treaty in history and has helped transform children’s lives around the world.