In Gaza, helping mothers reunite with children separated by the COVID-19 lockdown

The COVID-19 lockdown in Palestine left many women with no legal backing to secure child visitation and custody rights. Former partners took advantage of the legal paralysis to prevent mothers from seeing their children or to stop sending alimony. A joint programme by UN Women, UNDP and UNICEF has trained lawyers and provided free legal aid for 371 Palestinian women.

Marima* was desperate after her husband abandoned her with their two young daughters (aged 1.5 and 3), leaving them with no financial support.

“I could not afford to buy them diapers or milk,” she recalls. “I went to his family to complain about their son’s behaviour and how he left us and asked them for help for my daughters. My mother-in-law got really angry and forced me to leave their house without my daughters. I left thinking that I would get my daughters the following day because they were so young and needed me. But this was not the case.”

Marima tried to get her daughters back, but she couldn’t afford a lawyer and had nobody to turn to for help.

As in the rest of Palestine, family law in Gaza is based on Islamic Family Law, which regulates Muslims’ marriage, divorce, custody and alimony rights. But the economic situation is dire, and few women can afford lawyers to file custody or alimony cases.

Then, some women told Marima about the Palestinian Center for Human Rights (PCHR) and how it had provided them with free legal aid. Marima had not seen her daughters in three months when she visited the Center for the first time. After hearing her story, one of their lawyers made a custody request on her behalf and the court ruled in her favour.

“I was excited that I would be reunited with my daughters after so long,” she recalls. “But then, because of the coronavirus measures, public institutions – including the Sharia Court and its ruling-enforcement police – shut down and the decision was not implemented.”

When the Gaza Strip shut down in March 2020, to limit the spread of coronavirus in one of the world’s most densely populated areas, the suspension of the courts left many women with no legal backing to see their children. Many ex-husbands took advantage of this legal paralysis to prevent mothers from seeing their children or to stop sending alimony.

Marima felt desperate again. In the absence of the courts, her lawyer activated PCHR’s public relations network and spoke to the judicial police and her in-laws to resolve the situation amicably.

“Luckily, following calls by PCHR and other non-profits [that argued] that urgent cases like mine could not wait until deconfinement, the court decided to resume work on urgent cases like mine,” says Marima. “I was very happy to be reunited with my daughters after three months of separation finally!”

Her lawyer then proceeded to file for alimony. Since her husband had gone abroad to Turkey, they requested support from the public “Alimony Fund” until he returns. 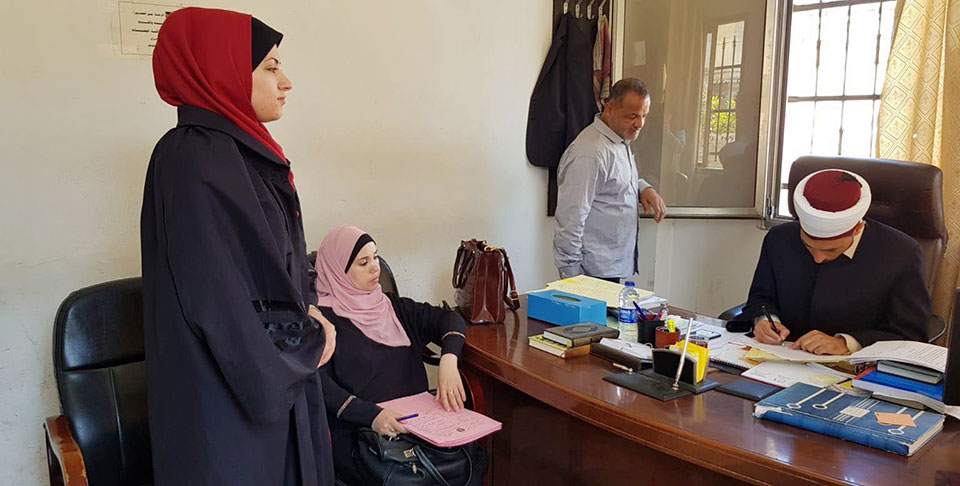 PCHR trainee lawyer Haya Al Wehaidi filing a request for her client to be granted   custody of her minor children at a Sharia court in Gaza Photo: PCHR

PCHR is working on a joint programme with UN Women, UNDP and UNICEF, named “Promoting the Rule of Law in Palestine” (SAWASYA II). Funded by the governments of Netherlands, Sweden and Spain, the programme trains young lawyers in Islamic Family Law, so they can provide legal representation to the most vulnerable Palestinian women in court. Since its partnership with UN Women began in July 2019, PCHR has trained 29 lawyers and provided free legal aid, including consultations and representation for 371 Palestinian women. Since measures to fight COVID-19 were introduced in March 2020, the Center has provided legal representation and consultations to over 150 women, by phone, until in-person meetings were allowed.

Mona al-Shawa, Director of PCHR’s Women’s Unit, says Gaza’s difficult economic situation prevents many women from accessing justice and rights to custody and alimony.  “Most of the women who come to us cannot even afford transportation. The most urgent cases were alimony cases,” says al-Shawa. “The other cases were about children visitation and custody rights.”

In cases of divorce or separation, women have the right to see their children for a limited amount of time when the father has custody rights. 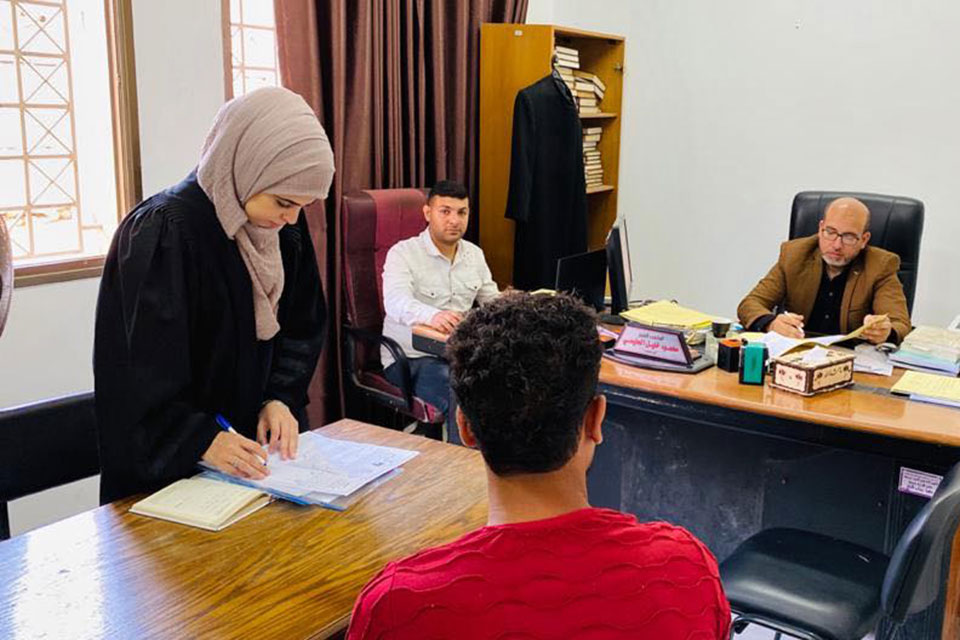 PCHR trainee lawyer Bissan El-ledawi files an alimony case on behalf of a divorced beneficiary in Gaza. Divorced women in the Gaza Strip are particularly vulnerable and often face stigma and financial instability and risk losing custody of their children. Photo: PCHR

Amina* is a divorced mother of two young teens (aged 12 and 13) who live with their father. By law, she has the right to host her children for 24 hours twice a month and see them outside once a week for three hours.

“Although too little, this time was more than what my ex-husband wanted me to have with my children. He did not want me to see them at all. He always found excuses not to allow them to come to me,” she says. “When the coronavirus started to spread in Gaza, he used it as a pretext to prevent them from coming to see me.”

Her husband then filed a case to annul Amina’s visitation rights. But she went to court, represented by PCHR, and the court ruled in her favour.

“I used to be afraid of my husband. Now he is afraid of me,” she says, confidently. “He knows that I feel safe and empowered by the law. He knows that I have lawyers standing by and that I am ready to sue him again if he tries to prevent me from seeing my children.”

“We have seen how COVID-19 has negatively impacted Palestinian women in so many different ways, including its impact on their child custody rights,” said Maryse Guimond, UN Women Special Representative for Palestine. “In times of crisis, no effort should be spared to help women access justice and reclaim their rights.”

*Names have been changed to protect the individual’s identity.

Related News
27/08/2021
Gender-responsive cash and voucher assistance is key to inclusive and sustainable development in Palestine, UN Women says
18/06/2021
From where I stand: Supporting refugee women amidst violence in Gaza
02/11/2019
One-Day Sports Event in Palestine Calls for Girls and Boys to Celebrate Generation Equality through Sports
29/10/2019
Under the HAYA Joint Programme, UN Women and UNOPS partner to support high-quality gender-based violence shelters to Palestinian women and girls
09/05/2018
Call for Proposals "Decent Work Opportunities for Women"
END_OF_DOCUMENT_TOKEN_TO_BE_REPLACED