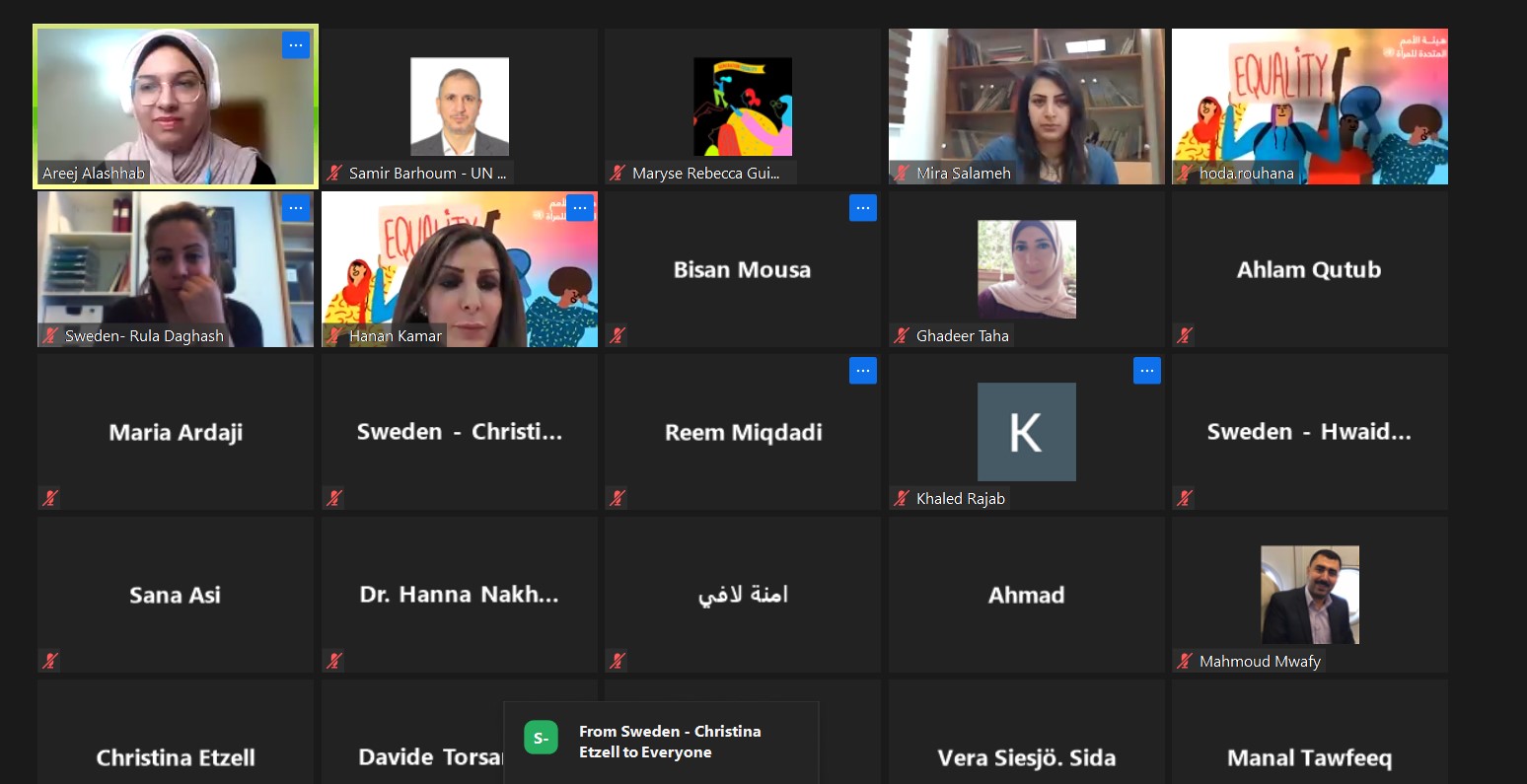 Participants take part in a virtual ceremony organized on Wednesday 7 April 2021 by UN Women Palestine, along with the Ministry of Women’s Affairs and the Ministry of Social Development, to launch SHAML project, aimed at “Enhancing the Protection and Reintegration of Furthest Left Behind Groups of Women and Girls Victims and Survivors of Violence in Palestine” (Photo: UN Women)

RAMALLAH - UN Women Palestine, in partnership with the Ministry of Women’s Affairs and the Ministry of Social Development, held a virtual ceremony today, Wednesday 7 April 2021, to launch SHAML project, aimed at “Enhancing the Protection and Reintegration of Furthest Left Behind Groups of Women and Girls Victims and Survivors of Violence in Palestine”.

The 18-month project, funded by the Government of Sweden, seeks to contribute to the reduction of the vulnerability of furthest left behind groups of women and girls victims and survivors of violence by addressing the protection and re-integration rights of three main groups, the elderly women with disability, the girls victims and survivors of violence, as well as the women and girls users of drugs.

UN Women Special Representative in Palestine Ms. Maryse Guimond said the project is based on the principle of “Leaving No One Behind”, central to the achievement of 2030 Agenda and the Sustainable Development Goals.

She emphasized that SHAML project comes in a timely manner in view of the rise in the number of violence against women cases witnessed in the wake of the COVID-19 pandemic.

"The importance of this project is that it is built on the vulnerability analysis and operates on three levels of interventions which are rapid intervention and response, policy and decision makers, and community outreach and awareness raising,” Mr. Al Deek said.

Advisor to the Minister of Women’s Affairs Dr. Hanna Nakhleh underlined the need for such a project which, he said, was developed in a full participatory manner with the involvement of relevant parties in the government, mainly the National Committee to Combat Violence against Women along with the Ministry of Women's Affairs and the Ministry of Social Development.

“The project is based on national strategies. The target groups for this project were planned through the protection and prevention pillar that was put forward through the second generation of the National Action Plan for UN Resolution 1325,” said Dr. Nakhleh.

Meanwhile, head of the Development Cooperation at the Swedish Consulate-General in Jerusalem Ms. Christina Etzell noted that her country, which is funding the project, was looking forward to have it launched, and will be following up its implementation.

“We also are looking forward to following the programme because we’ve been mainly involved in making this programme happen. The most important is that we will later see in the results if we actually managed with this approach from both the Palestinian and donors’ side to make positive changes for those left behind”.

During the virtual launch ceremony, Project Manager Hanan Kamar outlined the project’s aims, stages and the groups that it targets.

“The project is based on a comprehensive approach that addresses three interrelated levels, including, the prevention, protection and re-integration”  Ms. Kamar said.