Women in Hebron blow the whistle on widespread domestic violence

At the time, I was afraid and I just stood by. But today I would respond differently' 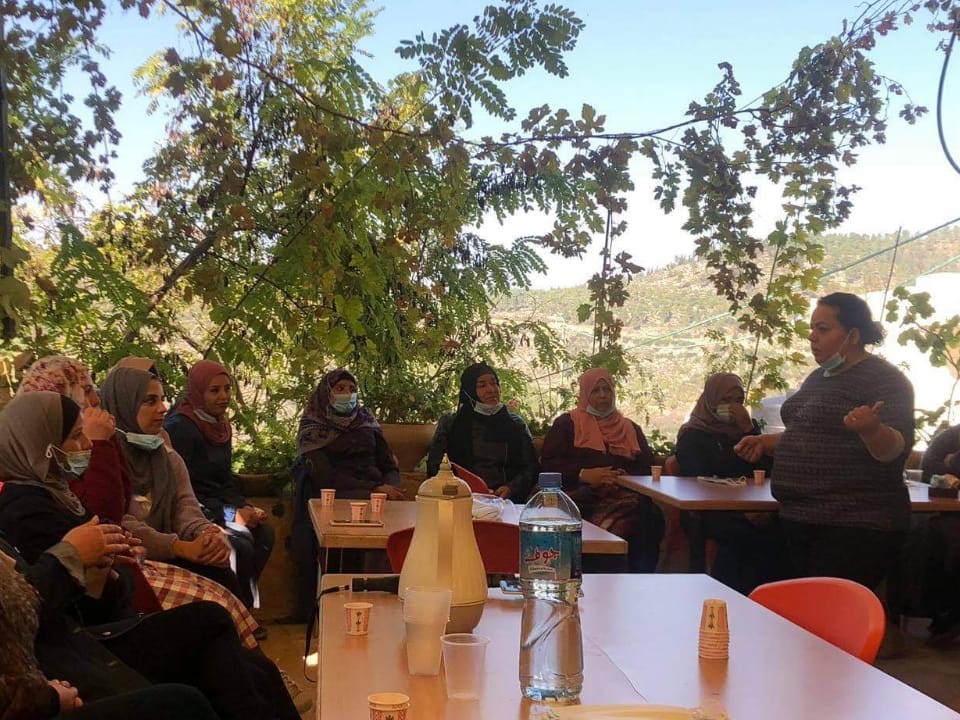 Women from the Palestinian city of Hebron attend a session on early warning system (Photo: REFORM)

According to polled women in Hebron, gender-based violence is one of the most prevalent forms of violence in their communities. These violations are rarely reported to the authorities, rendering accountability elusive. To end this vicious circle, a group of women is learning how to detect, document and report early signs of conflict-related and domestic violence in their neighbourhoods.

When asked about the most common form of violence they had witnessed in their immediate community, most polled women participating in training to detect and report gender-based violence said it was domestic violence. While the gravity of the abuses they witnessed varied and ranged from verbal to serious physical harm, their testimonies converged when they described the inadequate response of the victims’ families and communities to these violations.

“Some of those who witnessed the woman who was beaten up by her husband thought that the incident was a normal occurrence, while others saw it as a crime that should be punished. But they still did not defend the woman or communicate the matter to the competent authorities,” says 28-year-old Manal*, describing a neighbor who was so beaten up by her husband that the neighbors had to intervene.

Similarly, 30-year-old Roula* described how the neighbors, including her uncle, intervened to free another wife from her husband’s grip. “They just entered the house where the husband was beating up his wife and separated them. There was no response to this violence. They just basically saved her from him.”

In Hebron, most cases of domestic violence where the abuse is so bad that the neighbours hear the screaming of the victim usually end up with the intervention of the family, neighbours or the community’s elders who try to calm things down and hush the affair. The woman is usually told to bear the abuse to preserve the unity and protect the reputation of her family. In other less loud cases of domestic violence, the abuse goes unnoticed. In neither case is the abuser held accountable.

“At the time, I was afraid and I just stood by. But today I would respond differently. I would make sure to inform the victim's family to protect her in time or resort to the police and authorities to provide her with protection,” said Roula.  “I now can explain to women the gravity of gender-based violence and that there are women’s centres and protection institutions they can resort to for help.”

Manal and Roula, along with 41 women from Hebron, are participating “Women in Conflict Prevention in Hebron-Palestine,” a project implemented by the Palestinian Association for Empowerment and Local Development—REFORM, an independent non-governmental organization that works to empower social groups in Palestine, in partnership with the Rural Women’s Development Society and the Arab Educational Institute.  Funded by the Women’s Peace and Humanitarian Fund, with technical support provided by UN Women, the initiative seeks to increase women’s participation in conflict prevention and resolution, including domestic conflict.

Trainees learn how to observe, detect and document early signs of conflict and gender-based violence and feed them onto an early-warning system comprised of WhatsApp groups and a website. Ultimately, this early warning mechanism will be connected to national and international reporting and response systems. Once launched, it will be the first community-based early warning system run by women in Palestine to detect and prevent conflict and violence.

“The training was useful to me. I work in medical relief in remote locations. I’ve learnt how to detect signs that women are being subjected to violence and how to establish relations with some women and learn about their challenges and problems,” said 38-year-old Heba* who works in Hebron. “Early warning is very important to diffuse tensions before they escalate and to deter violence. They make the abuser realize that there is a system capable of detecting crimes and holding him accountable.”

“Women are essential peacemakers and peacekeepers in their own families and neighborhoods,” says Ms. Maryse Guimond, UN Women Special Representative in Palestine. “It is time that the national and international actors acknowledged their added value in preventing conflict and violence, preserving social cohesion and advancing peace efforts.”

*All names have been changed to protect the trainees’ privacy.