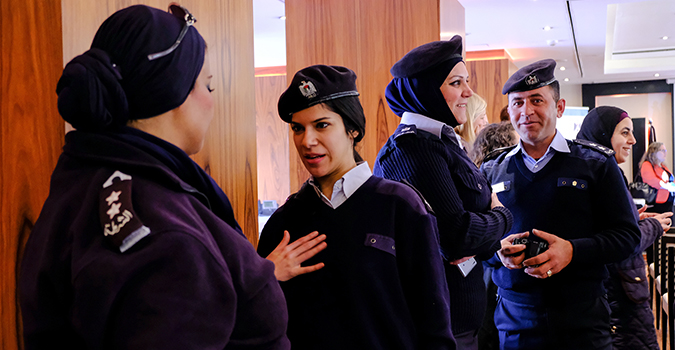 At the launch ceremony of the Palestinian Civil Police (PCP) gender strategy, the atmosphere remains obviously masculine, with far more men than women in the audience wearing the uniform. Still, as police women and men interact and congratulate each other, the feeling that police officers happily embrace this change is palpable.

"It is still challenging for people because this appears as a new and unclear concept but if you explain they do understand and change their perceptions" explains Muhammad, one of the police gender coordinator in districts, who play a key role in community outreach on women’s security issues as well as internal awareness raising within the police. “Women can do the same work as a man in the police, but either way, women must be part of the police because we cannot leave aside half of the society.”

At just over 3 per cent, there is still a long way to go to reach the global average of 10 per cent women representation in the police and to provide the diversity that leads to improved citizen security, especially for women. More women have however started joining the police, reflecting a change within both police and society towards the role of women in security institutions. 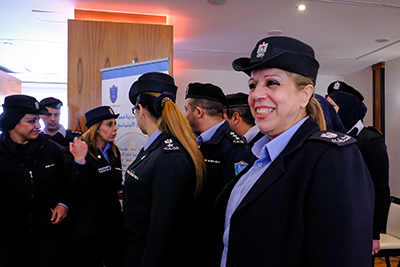 Lt. Col. Wafaa Al Hussein, Head of the PCP Gender Unit
“We received hundreds of female applications in the recent recruitment for officers in the Corrections and Rehabilitation Centers Department. We would have been lucky to have 10 a few years ago” says Lt. Col. Wafaa Al-Hussein. Wafaa, the Head of the Gender Unit, embodies the shift towards gender equality in the police. When she was first appointed to the gender unit in 2010 she was the only member and did not even have an office to work from. Within a few years, she has secured cooperation with the different police departments, and now is at the head of an 11-person unit.

The issue is however not only confined to numbers, but also to female representation in the different departments and levels. “Time has come for women to be represented at the decision-making level in the police” says Zahara, another police gender coordinator. But she also confesses that women, as she did, often prefer to hold administrative positions than work in the field, with direct implications on their careers. “If women remain out of the field, they will not reach this higher level” she says, “men often see themselves entitled to a position because they have been working in the field and therefore deserve it better. For a woman with children, it will be more difficult. In offices, you have clear working hours, while in the field it is less predictable.” 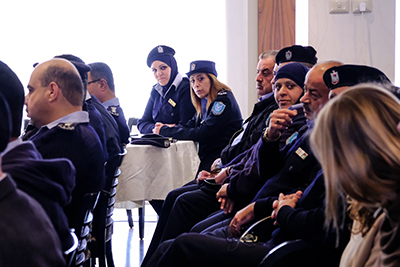 Zahara (in the centre), PCP gender coordinator in districts.
Recruiting, but also retaining, women in the police is one of the core objectives of the Gender Strategy that has been developed by the Palestinian Police in cooperation with UN Women. From better accommodating women officers, to facilitating their access to opportunities to grow their career in the police, the Strategy lays a clear and comprehensive road map to increase the representation of women in the police, with a view of improving services delivered to citizens. “The Gender Strategy is a powerful tool on how we can lead the change” explains Zahara, “and how to work within the police to change mentalities and norms, and in parallel, change perceptions in the society.”

As evidence of this commitment, the police have already started the implementation of the strategy; for example, key departments have integrated it in their plans and the gender unit has initiated an assessment of infrastructure to improve the working environment for women.

“If there had been a gender strategy when I first entered the police, I don’t think I would have had followed the same path” tells Zahara, “I would have considered other directions, such as the national guard, or specific field positions with the traffic department or criminal investigation.”

Zahara entered the police at a time when few women were even considering policing as a possible or acceptable career path. Eighteen years later, and with a gender strategy pushing boundaries and supporting her ambitions, Zahara says proudly: “I have started to feel the change and it encourages me to continue. There are times I believe that one day I could even become the Chief of Police.”